To follow up on the small Twitter rant that got people to explain GPG and OTR to me for a whole day, I'll explain the ideas behind this. 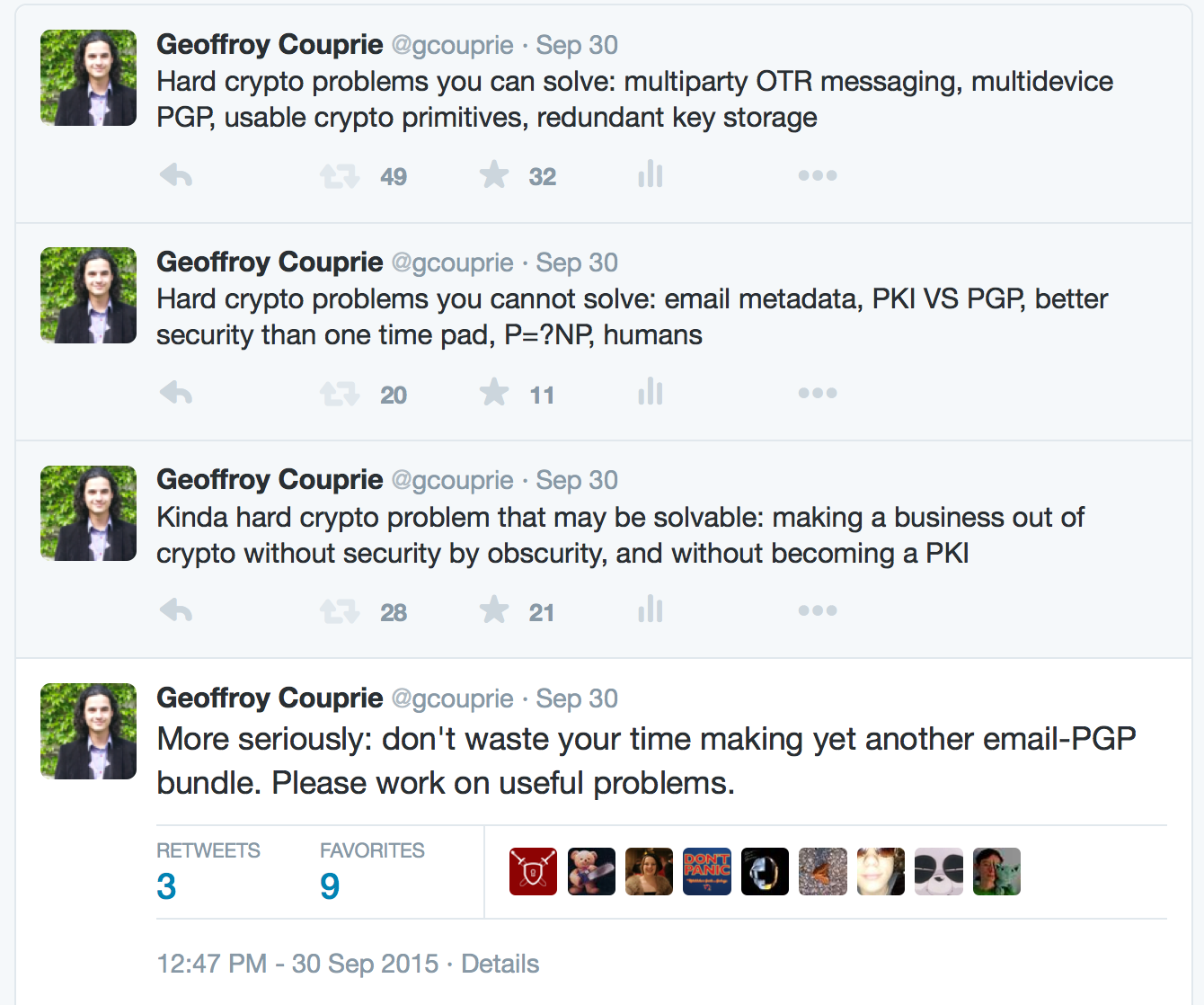 There is always a new project around self hosting email and PGP, or building a new encrypted chat app. Let's say it aloud right now: those projects are not trying to improve the situation, they just want to build their own. Otherwise, they would help one of the 150 already existing projects. Worse, a lot of those try to build a business out of it, and end up making a system where you need to completely trust their business (as a side note, building a business is fine, but just be honest about your goals).

There are things that attract new projects, because the concept is easy to get, and this drives developers right into the "I'm smarter than everybody and can do better than existing projects" territory. But there's a reason they fail.

Making an encrypted chat app is solving the same problem as making a chat app -moving people off their existing platform, onto a new one- and additionally writing a safe protocol. Building a whole new infrastructure is not an easy task.

Making email and PGP easier to use is not only a UX issue. There is a complete mental model of how it works, what are the failure modes, and what are the trust levels. And you add above that the issues of email's metadata leaks, the lack of forward secrecy, the key management. Even with the simplest interface, it requires that the user builds that mental model, and that she understands other users may have different models. This is pervasive to the way PGP works. It has always been and will always be an expert's tool, and as such unfit to be deployed massively. You cannot solve infrastructure problems by teaching people.

There is a pattern here: people want to build tools that will be the basis of safe communications for the years to come. Those are infrastructure problems, like electricity, running water or Internet access. They cannot be solved by teaching people how to use a tool. The tool has to work. They cannot be solved either by decentralization. At some point, someone has to pay for the infrastructure's maintenance. As much as I like the idea of decentralizing everything, this is not how people solve serious engineering problems. But the difference with other types of business is that infrastructure businesses are dumb pipes. They don't care what's running through them, and you can easily replace one with the other.

There is a strong need for "private by default", authenticated, anonymous communication. This will only come if the basic building blocks are here:

Those are worthwhile targets if you know a fair bit of cryptography and security, and know how to build a complete library or product.

But for products, we need better models for infrastructure needs. A like Tahoe-LAFS is a good model: the user is in control of the data, the provider is oblivious to the content, the user can be the client of multiple providers, and switching from one to another is easy. This does not make for shiny businesses. Infrastructure companies compete mainly on cost, scale, availability, speed, support, since they all provide roughly the same features.

Of course, infrastructure requires standards and interoperability, and this usually does not make good material for startup hype. But everyone wins from this in the end.