TL;DR: the new nom version is simpler, faster, has a better documentation, and you can find a summary of what changed in the upgrade documentation.

side note: how fast is nom? it can reach 2GB/s when parsing HTTP requests. 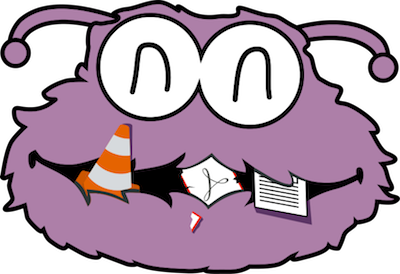 Since nom is now a well established, serious project, we got a brand new logo, courtesy of Ange Albertini. The nom monster will happily eat your data byte by byte :)

It took nearly 6 months of development and the library went through nearly 5 entire rewrites. Compare that to previous major releases, which took a month at most to do. But it was worth it! This new release cleans up a lot of old bugs and unintuitive behaviours, simplifies some common patterns, is faster, uses less memory, gives better errors, but the way parsers are written stay the same. It's like an entirely new engine under the same body work!

Moving from IResult to Result

This was a long standing request. nom used a three-legged enum as return type for the parsers:

That old IResult structure did not transform well to the commonly used Result, people did not want to see the Incomplete case (when the parser indicates it does not have enough data to decide) if they do not need it. And the different error types depending on the verbose-errors feature were confusing and causing errors when nom appeared multiple times in dependency trees.

So I replaced it with a new, Result based design:

Aside from being more compatible with, like, the whole Rust ecosystem, this new design has lots of interesting points:

And we get all of these benefits while keeping the same memory footprint in "simple" errors mode, and reducing it in "verbose" errors mode:

And it gets faster! Depending on the format, I have seen improvements between 4% and 40%!

nom's parsers are designed to work around streaming issues: if there is not enough data to decide, a parser will return Incomplete instead of returning a partial value that might be false.

But if you get that input in chunks, like ab then c123;, the alphabetic characters parser will return Incomplete, because it does not know if there will be more matching characters afterwards. If it returned ab directly, the digit parser would fail on the rest of the input, even though the input had the valid format.

For some users, though, the input will never be partial (everything could be loaded in memory at once), and the solution in nom 3 and before was to wrap parts of the parsers with the complete!() combinator that transforms Incomplete in Error.

nom 4 is much stricter about the behaviour with partial data, but provides better tools to deal with it. Thanks to the new AtEof trait for input types, nom now provides the CompleteByteSlice(&amp;[u8]) and CompleteStr(str) input types, for which the at_eof() method always returns true. With these types, no need to put a complete!() combinator everywhere, you can juste apply those types like this:

And as an example, for a unit test:

These types allow you to correctly handle cases like text formats for which there might be a last empty line or not, as seen in one of the examples.

If those types feel a bit long to write everywhere in the parsers, it's possible to alias them like this:

Previous documentation was scattered around and hard to navigate, especially when trying to find the exact combinator that would work perfectly for what we want.

So the new README is now more about what can be done instead of an incomplete reference.

The documentation homepage is an introduction to parser combinators and nom's design, with some examples to show common combinators like do_parse.

There's a brand new "choosing a combinator" doc to help you find what you need, arranged by categories, with example usage and expected results.

And there are new examples for a lot of parser and combinators.

no_std usage is now working correctly. For most of nom's combinators, you will not need anything more than core, and a few basic combinators like many0 or separated_list require alloc.

Some parsers sometimes ended up in the middle of UTF-8 characters, now those streams are handled correctly.

And here is the difference for verbose errors:

nom 4 is not faster everywhere, ther are still some small regressions that will be fixed soon, but overall we see great improvements.

With nom 4 and some recent work around integrating lookup tables and vectorization in nom parsers, we can get impressive results in HTTP parsing (comparing with combine, Joyent's http-parser, httparse and picohttpparser): 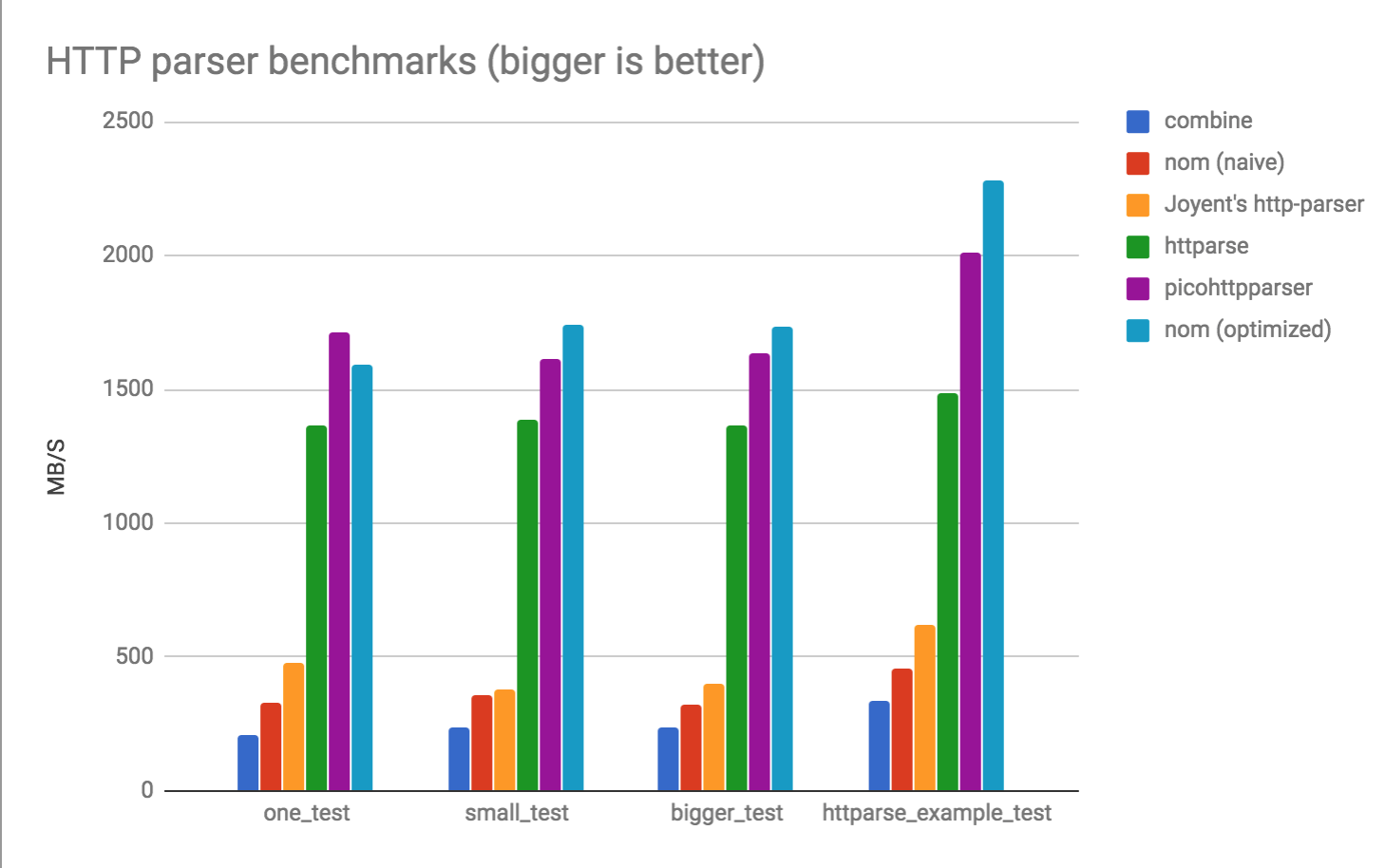 the future for nom

nom 4 is a huge release, and the new design will probably take some time to settle. There's probably a lot of low hanging fruit on the performance side, and I look forward to my next obsessive profiling sessions.

Meanwhile, nom will continue to happily munch bytes for you, as one of the fastest, most reliable parsing libraries available.

In the future, I'm interested in supporting more use cases, like zero allocation parsers or Web Assembly usage, and integrating more SIMD work, like what was done for the HTTP parser. The goal is to get nom parsers to secure data access in more and more systems, whatever the language or platform.